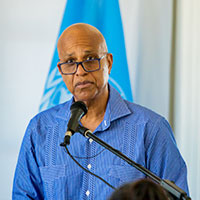 A call to mobilize

Only half a mile offshore from where you sit, the Belize Barrier Reef extends North and South along Belize’s coastline. It is the biggest barrier reef complex in the Atlantic Caribbean region and the most pristine in the Western Hemisphere. And it is, in fact, the second largest in the entire world.

This Barrier Reef is one of Belize’s greatest resources, acting as an incubator for the fish and marine life that sustain the livelihoods of some 200,000 Belizeans; it is a natural wonder which draws visitors from near and far; and it is as well a breakwater against the destructive power of waves and a refuge for endangered species. It is part of our patrimony, a national icon that links generations past, present and future. It was also some time ago declared a UNESCO World Heritage Site, a fitting tribute to its ecosystemic longevity and diversity.

It should come as no surprise therefore that Belizeans have defended the environmental integrity of the Reef and its resources, especially through progressive conservation measures.

We have long surpassed international goals for establishment of marine protected areas with 21 percent of our territorial waters under some level of protection. That is double the international target of 10 percent by 2030. Our mangroves, which have a symbiotic relationship with the Reef and marine resources, are now fully protected.

And recently, to complete the circle my Government has legislated a ban on offshore oil exploration.

Stakeholders have also urged an end to single use plastics. And by Earth Day 2019 a proscription to that effect is likewise expected to become Law.

There are, then, huge conservation gains that Belize, like the rest of the Caribbean, has made. But a moment’s reflection makes clear that there is no room for complacency. There are threats all around, and many of them come from distant waters and shores. Thus, the Caribbean Sea grows warmer and more acidic not as a result of our actions but because of the industrialized world’s concentrations of carbon dioxide and other greenhouse gases. And our natural and planned defenses are no match for the superstorms that are the new climatic norm. This underlines the sobering reality of the inadequacy of even our most ambitious actions.

These threats to our sustainability as small islands and low lying coastal states sometimes seem innumerable. And they join myriad other dangers represented by, for example, non communicable diseases and the proliferation of small arms. The scourge of transnational organized crime is not only a citizen security issue, but is destabilizing of our indigenous financial systems and has made us victims of de-risking and placed us in an economic and trade stranglehold.

In other words a perfect storm is overtaking us and all our resilience is required to combat it.

Fortunately, the Caribbean has a long history of resilience. It is what has seen our nations/peoples rise out of the historical rubble of colonial and neocolonial oppression. It is a resilience that has been individual but also wholistic, made so by Caribbean wide solidarity. Clearly, though, there can be no resting on laurels. As the challenges are unceasing, so must the struggle be. And the particularly critical crunch we are currently experiencing constitutes a new imperative for collective Caribbean action.

Working together in the required deliberate manner, we have already successfully placed the special case of small island developing states on the international agenda as a matter of international priority. The 1994 Barbados Programme of Action today serves as the foundational document defining the SIDS Agenda for Sustainable Development; and it has since been expanded with the Mauritius Strategy for Implementation (2005) and now the S.A.M.O.A. Pathway (2014). As evidenced in the breadth of the SIDS Agenda 25 years since Barbados, the SIDS special case has had to be dynamic as our development challenges have become more and more acute. So the brief has been filed and continuing Caribbean advocacy is full bore. But, we may be forgiven for questioning whether the international community’s response has been all that it should be.

Why, for instance, is the world still set on a path to 4 degrees or more despite the scientific evidence that SIDS will only barely survive even global temperatures capped at 1.5 degrees C?

Why, despite our objective capacity constraints for accessing and mobilizing finance are SIDS still subject to the same access criteria as others far better equipped in every way to easily attract investments?

Why are our small economies being graduated into categories of high middle income or high income status to further strait jacket us?

To put it at its mildest, it is clear that despite our special and different circumstances global policy still deploys a one size fits all approach. This is unsatisfactory and we must therefore campaign without let for a proper international focus on and support for the SIDS Agenda. It is the only way to bolster our indigenous efforts and empower our resilience in the face of the multiple obstacles confronting the Caribbean’s sustainable development trajectory.

Now, therefore, is the time to refocus the spotlight on SIDS. And this is the opportunity to tailor solutions to address our special case. The San Pedro Declaration which you will adopt as the outcome of this meeting should serve to strengthen international resolve and mobilize international action for the SIDS Agenda. It must be emblematic of our strong and effective SIDS leadership. And it must be a reminder to the world that our well documented contributions to the global community are the plinth now of our call for that community to in turn address our needs and advance our cause.

Stay Up To Date

Copyright © 2019 Permanent Mission of Belize to the United Nations